Joined 4 mo ago
·
30 Posts
I'm very excited to see what the feedback is going to be for the new RX, especially with how much is similar/different to the current generation.

eagle said:
Any guess on when to expect the 450h+
Click to expand...

It looks like first drives of that spec has started:

Joined 4 mo ago
·
32 Posts
TFL did some quick coverage of the RX models at the press event, they'll be doing something more formal soon.

LexLuthor said:
Kirk Kreifels just gave his take on the RX300 and RX500h

Kreifels shared another video with the RX350h

Joined 4 mo ago
·
32 Posts
CarScoops is asking if there's anything you would like to know about the RX.
Get your questions in while you still can! 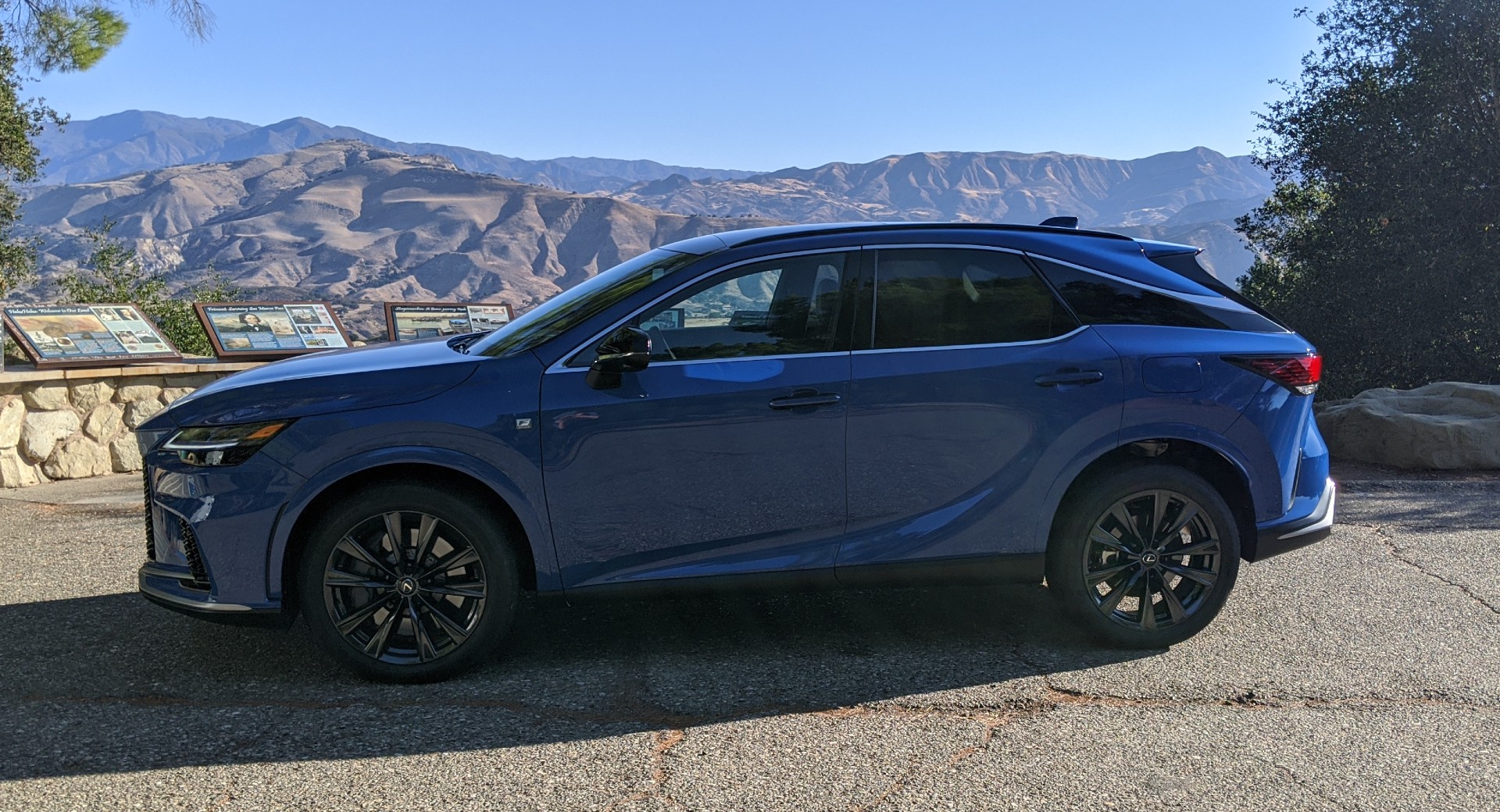 We're Driving The All-New 2023 Lexus RX, What Do You Want To Know? | Carscoops 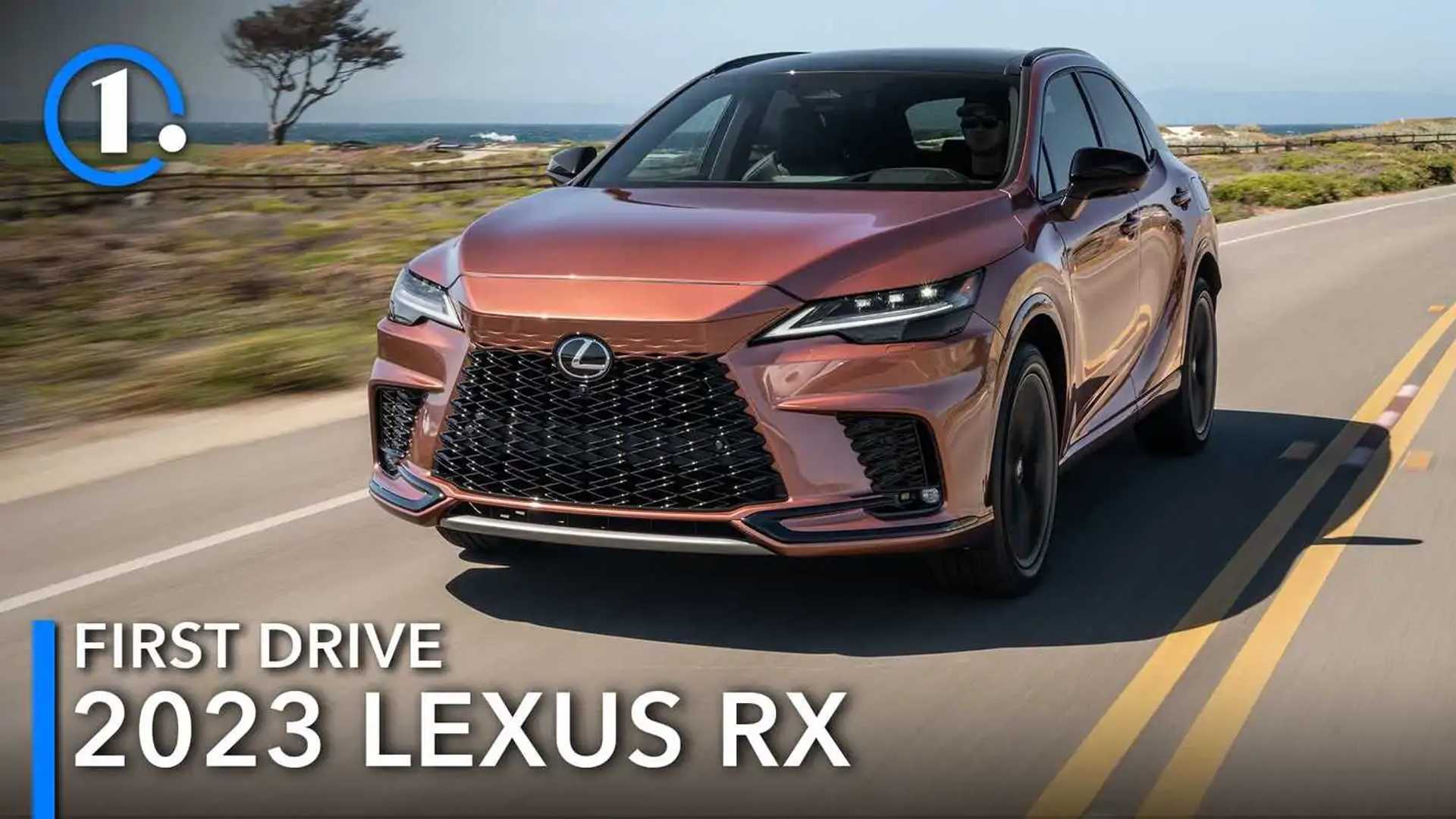 Long a bastion of competent-but-bland comfort, the 2023 Lexus RX finally has some verve to go along with its bold, modern styling and classy interior.

Steadfast Improvements
While the outgoing RX was perfectly fine, its trackpad-operated infotainment system, somewhat noisy cabin, and peaky V6 made it feel a bit dated and inelegant. Like it said on my freshman algebra report card, there was room for improvement.

But unlike 15-year-old Brett, Lexus took summer school and hit the books hard, returning in the fall with far more talent and intelligence than before. The new RX upholds its company’s typical values – comfort, quietness, and usability – even better than its predecessor, but now it offers some semblance of driving fun to go along with its left-brained attributes.

The three-strong engine lineup will soon expand to four with the availability of an RX 450h+ plug-in hybrid model likely using the NX PHEV's powertrain, but even before that, the Lexus crossover has something to offer most shoppers, be they looking for efficiency, balance, or a bit of driving fun. It may not be ready to go hunting Cayennes, but when was the last time a Lexus crossover was this entertaining? Probably never.

Despite some changes under the hood, the latest RX strives to deliver the same luxury and comfort it always has.

The RX's interior is most improved, especially with regard to infotainment. Lexus ditches the outgoing SUV's much-maligned trace-pad controller and instead switches to a touchscreen setup. A 9.8-inch unit is standard, though a 14.0-inch display is optional.

The dashboard is more modern and striking than before, but some cabin materials, such as the plastic on the center console and the lighter-colored fake woodgrain, left us disappointed. By contrast, the mix of more substantial elements on the dash and the fabric door inserts are up to luxury standards.

Redesigned but not reimagined, the 2023 RX should meet the expectations of returning Lexus customers who value calm comfort over potent performance. Those more accustomed to pricier German luxury SUVs, however, will likely find the RX wanting in terms of driving dynamics and interior quality. Lexus, though, seems wary of majorly altering its original and popular formula.

After seven long years, the RX has finally been redesigned—but how does the new RX350 drive? 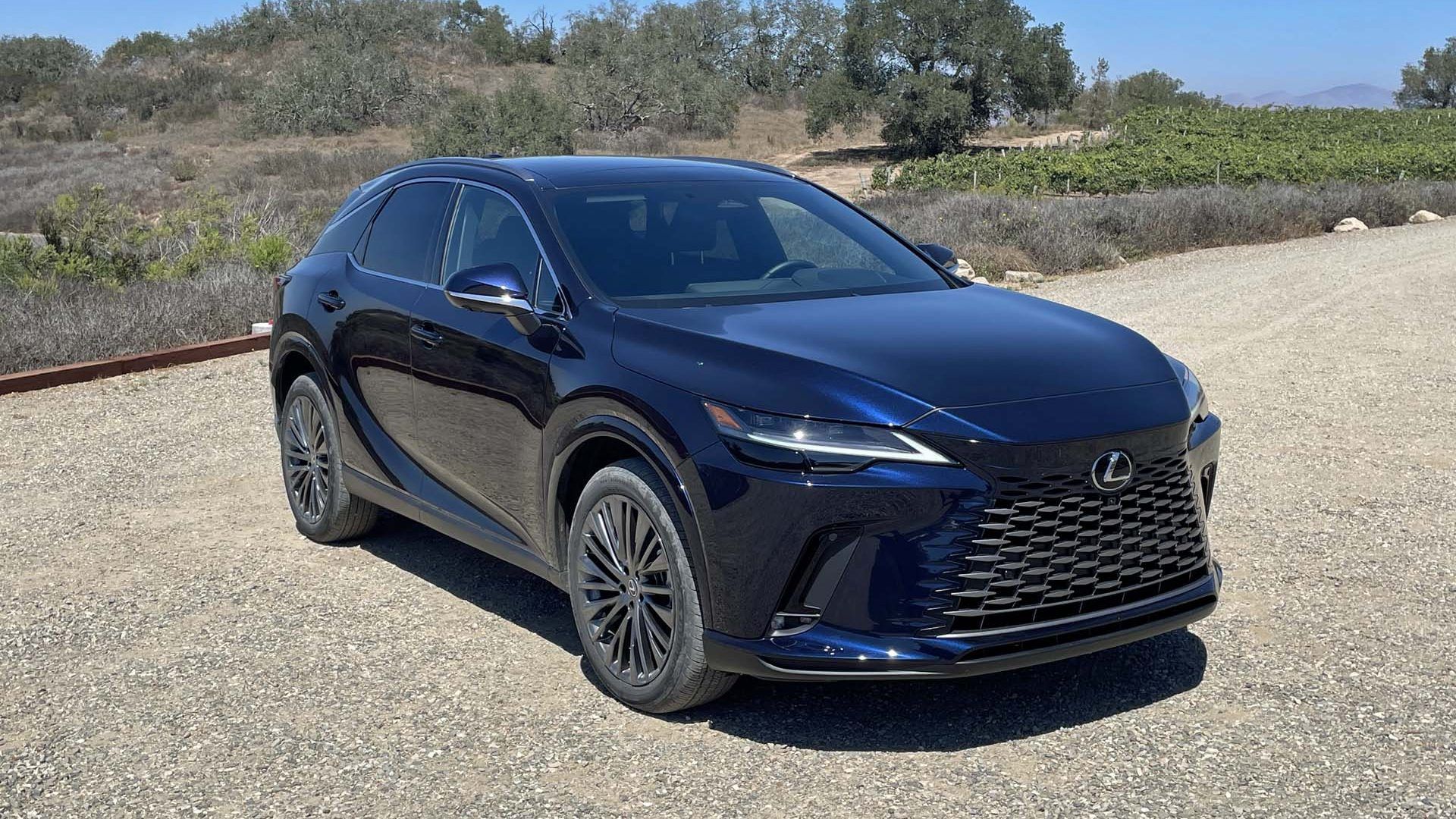 With three new hybrid powertrains, the fifth-gen RX is destined to keep its best-selling crown

The biggest single improvement is the infotainment system. Gone is the finnicky touch pad-based unit in favour of a clean and clear system that’s easily mastered. The lower trims use a sizeable nine-inch screen; move up and the larger 14-incher gives the functions more breathing space. Along with all the usual applications, including Apple CarPlay and Android Auto, it houses an available 21-speaker Mark Levinson sound system and the drive modes.

The modes include Eco (only for use when both the battery and gas tank are very low!), Normal for everyday driving, and Sport for the fun times. Custom allows the driver to pick the settings for the powertrain, steering and air conditioning. The RX 500h and RX 350 with the F Sport package aboard add the adaptive suspension to the settings mix. The problem is the only way to change the drive mode is through the infotainment system. Having a separate set of controls, as the Lexus NX does, would bring faster, easier access. 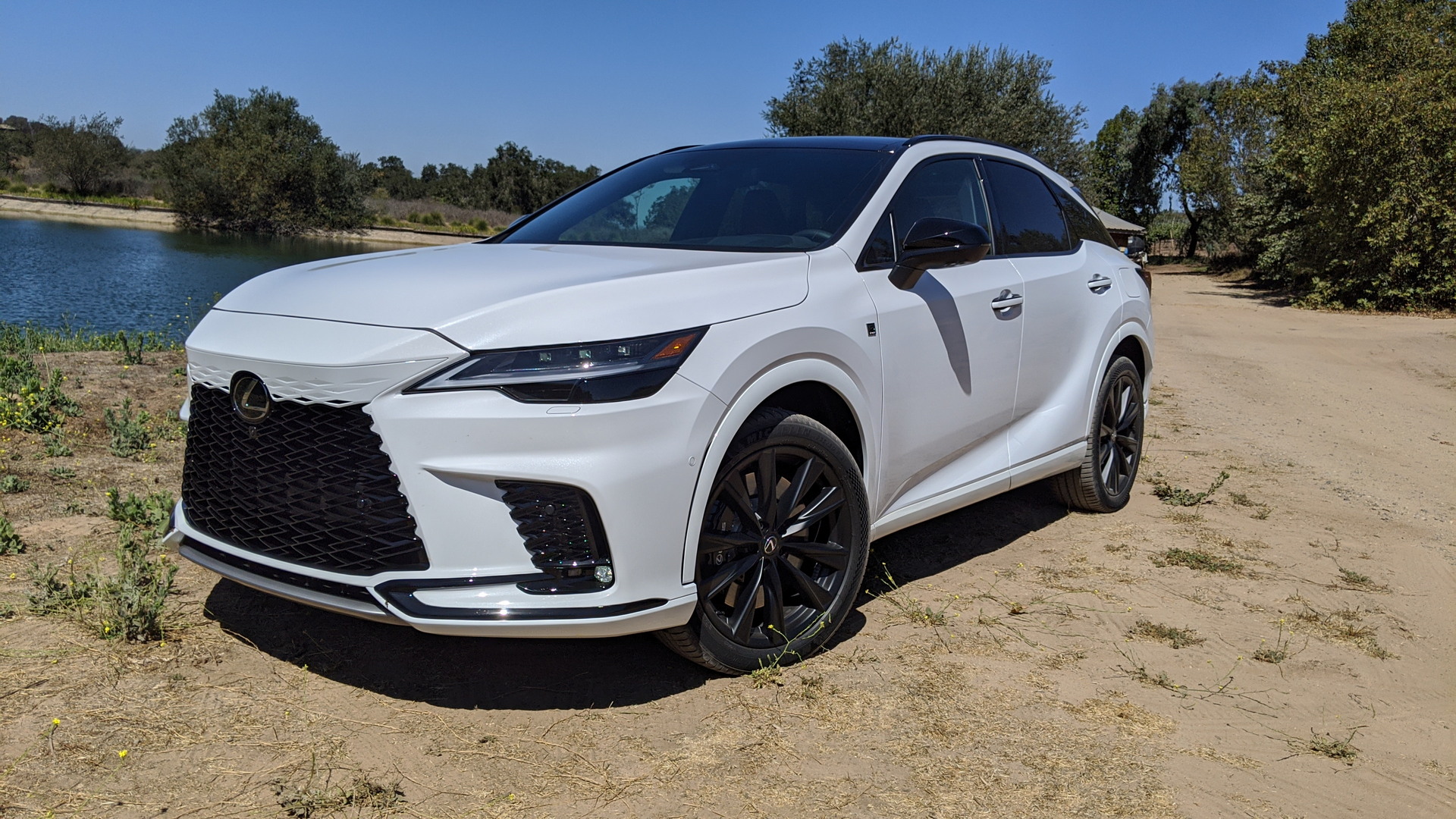 Distilling A Great Recipe
Lexus made it very clear in its presentation that it doesn’t think that the RX is going up against the likes of Tesla Model Y or the Cadillac Lyriq because they’re battery electric vehicles. Conversely, it does see the RX going up against the likes of the BMW X5, the Acura MDX, and the Mercedes-Benz GLE. Among that group, only the MDX can really go toe to toe with it when it comes to pricing if our estimated starting MSRP is correct.

Starting around $50,000 would make the RX one of the most well-rounded mid-luxury SUVs on the market today. To put that another way, there’s no one specific aspect of the RX that is unquestionably better than the rest of the field but every aspect is well above average. That makes it a compelling competitor in a market that’s more cluttered today than Lexus execs probably could’ve imagined back when the first RX debuted. You can only break ground on a project once but the new 2023 Lexus RX is adding a new level of quality that others will now have to contend with. 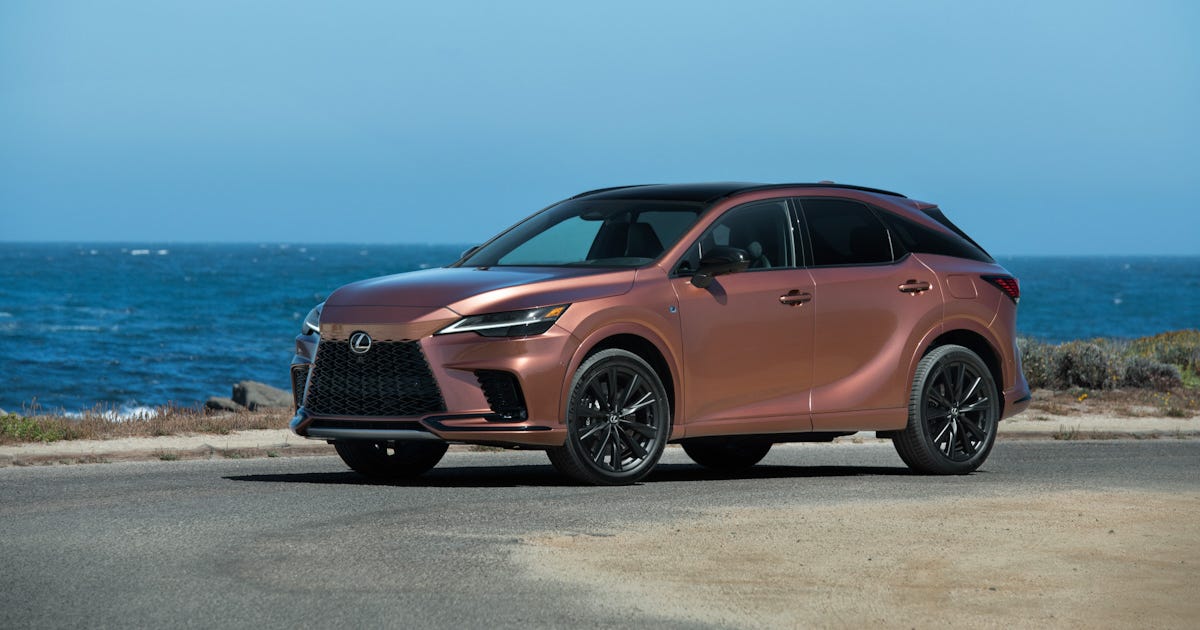 The 2023 Lexus RX Remains a Top Pick Among Luxury SUVs

Lexus doesn’t stray too far from the established formula with its best-selling luxury crossover, but makes some bold moves with the new RX that mostly pay off.

High quality interior
The RX's cabin is handsomely appointed and has a simplified design. Much of this redesign comes at the expense of physical controls -- such as climate controls permanently located on the touchscreen -- which is a bit of a user-friendliness bummer, but also comes with certain advantages for patient drivers.

For example, the steering wheel buttons are almost completely devoid of printed labels. Instead, tooltips appear in the standard 7-inch digital instrument cluster or the optional head-up display when the driver's thumb contacts the capacitive pads. This means there's a bit of a learning curve for memorizing where your thumb needs to go, and there's a bit of lag in responsiveness, but users can now program a second layer of controls to put their most commonly used functions at their literal fingertips. It's a bit annoying at first, but could be a huge benefit to owners who take the time to personalize.

The tall seating position is nice, and I dig how the steering wheel can be positioned quite low without blocking the gauges. The doors pop open at the push of a button with electronic latches (there are hidden mechanical pulls in case the battery dies) and integrate with a new feature called Safe Exit Assist, which prevents the doors from opening if the RX detects they might collide with a vehicle moving into the blind spot.

Rounding out the new creature comforts is a quicker opening rear hatch with a lower load-in height and a new feature that Lexus calls Walk and Lock. When the RX detects that the driver has walked away from the open hatch, it automatically closes the liftgate after 90 seconds and locks itself. This is very useful when your hands are full with cargo. The RX also continues to offer kick-to-open hands-free access on approach.